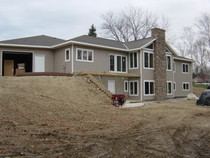 Meaning shorter mortgages or more free capitol in your pocket each month.

So in short, you pay less, and get more.

New page > About Us

At Howe Construction we have handled commercial and residential projects. Our people know what your project needs. Our policy of exclusively hiring forward-thinking innovators and managers means that we always create functional solutions to meet your needs at suprisingly reasonable costs. 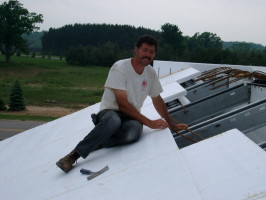 Our First ICF was built in 1991 as a spec house, a get our feet wet project.

The concept was to build a low cost ICF home that would have high r-value windows radiant heat and would compete with cheaply built double wides.

This first spec. House and the 2 additional house’s that followed were all successful and fulfilled the conceptual premise.

In the following years ICF construction was a smaller part of our construction business, however growing rapidly after 2002.

With less than 100 projects we totaled over 130,433 square feet of ICF wall surface. That equates to over 3 miles of 8-foot tall ICF walls. Not including the Tifton Hotel, which was 1.5 miles of ICF wall.

This TICFS has advanced features such as:

We have continued to future developed the Total ICF Structure in the buildings that have followed.

We pioneered our monolithic ICF wall and composite floor in this Hotel.

The All ICF Western Wayne Elementary School in Pennsylvania.

Parapet walls and the roof were also poured together.

The Model Office in the United Arab Emirates.

Featuring the 3D wire reinforced foundation. It was built in much less time than convention technique and with fewer materials. It has never cracked even though it was poured at over 120 degrees.

Communication has become one of our key assets especially when working in other countries.

We have learned to listen to our clients needs and are able to convey that message to the trades.

Examples of this are: